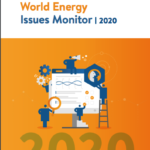 The World Energy Issues Monitor 2020 was launched on 26 February and featured during the official meeting between the World Energy Council Secretary General and CEO Dr Angela Wilkinson and Professor Dr Klaus-Dieter Borchardt, Deputy Director-General, Directorate-General Energy (ENER), at the European Commission’s Headquarters in Brussels. The 2020 edition of the World Energy Issues Monitor provides unique insights into what energy leaders identify as their critical uncertainties and action priorities this year.

The Council’s Secretary General & CEO and Regional Vice Chair Europe met on 26 February in Brussels with the Directorate General Energy (DG ENER) at the European Commission. The productive discussions, attended by Dr Klaus-Dieter Borchardt, Deputy Director General Energy, and his colleagues, featured opportunities for cooperation between the Council, whose European membership extends from Portugal to Russia and includes 25 out of the 27 European Union Member States, and DG ENER, in support of its ambitious plans for climate neutrality and the Green Deal.

Global challenge to define the role of citizens in energy transition

Global challenge to define the role of citizens in energy transition

The World Energy Council is working with Omdena, a collaborative platform for building AI solutions to real-world problems through global collaboration, to launch a global challenge to understand how citizens of the world perceive their role within the energy transition. This challenge aims to increase awareness of potential social barriers and unexpected risks to energy transition.

15 start-ups from 11 countries across 5 continents have been nominated as finalists of the “Start Up Energy Transition (SET) Award 2020”. The finalists impress with outstanding ideas and make an active contribution to accelerate energy transition. Their business models will be presented at the “Start Up Energy Transition Festival” taking place on the 24 March in Berlin. Our Members can attend the Tech festival with a special discount.

Responsible investment in energy is not all about infrastructure and technology. It is also about people and policy choices – and the quality or productive access needed by families, local communities and cities healthy and happy energy societies to flourish through energy transition. Just before the start of the 12th Africa Energy Indaba in Cape Town on 3 March, Dr Angela Wilkinson published her new blog.